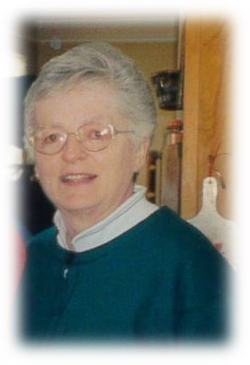 Donna Margaret (Parker) McGill, of Berwick, passed away peacefully at home in the company of her family Thursday, October 7, 2021. Born in Berwick, September 22, 1935, she was the daughter of the late Ronald W. and Love B. (Baltzer) Parker.

Having grown up in Berwick, Donna had the privilege of graduating from Berwick High School in 1953. She was an active participant in the wonderful music program provided by the school, and from elementary through high school she was very involved in the Annual Musical Festival competition at Acadia University over the years, particularly in the vocal, piano, and choral categories. Being from a musical family played an important role in her life, Donna's musical abilities were many, being a member of the "Parker Sisters Trio", a member of the Berwick United Church Choir, and a band member of the "Chords". As well as singing, she also enjoyed playing the piano and saxophone. She was a member of the United Church of Canada in Berwick, also a member of the Professional Secretaries Association of Nova Scotia, and a supporter of The Canadian Wildlife Federation.

After graduation from high school, Donna attended Mack Business College in Kentville, graduating early with Secretarial Honors in April of 1954. Upon graduation she was immediately employed with M.W. Graves & Co. Ltd. in Berwick as Secretary/Receptionist.

In a leave of absence, Donna traveled to Trinidad where she visited with family and, while there, was employed with Radio Trinidad in Port of Spain. Donna also resided in Fredericton, NB where she was employed with F.J, Morrison & Sons Insurance, and acquired her Typist Certificate for the Civil Service.

In 1959 Donna returned to M.W. Graves & Co. Ltd. in Berwick as Executive Secretary to Senior Management, holding this position throughout its transitions, (Stokely-Van Camp Ltd. and Cobi Foods Inc.), until retirement in 1993. Her mastery of the typewriter and accuracy of her secretarial abilities were exemplary. Donna loved her career and was very passionate about it. Upon her retirement Donna enjoyed many years of good health and a quiet lifestyle at home with her daughter Alanna, and the wonderful family pets. She was a loving and devoted mother who also cared deeply about nature and all its creatures.

Arrangements have been entrusted to White Family Funeral Home and Cremation Services, Kentville. There will be no funeral at the request of the deceased. Interment will be at the family plot in the Berwick Cemetery at a later date. Donations in memory of Donna may be made to the Canadian Cancer Society, Berwick Royal Canadian Legion, or animal welfare group of your choice. On-line condolences and inquiries may be directed to www.whitefamilyfuneralhome.com.