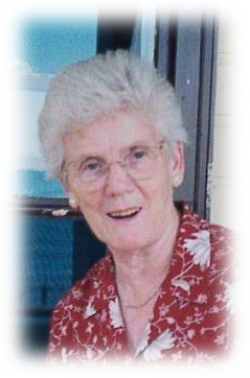 Barbara Teasdale, aged 92, passed away October 9, 2021 in the Rose-Marie Care Home, Hantsport. Born at home in Gaspereau, she was a daughter of Llewelyn and Hattie (Benjamin) Westcott. She was predeceased by her husband, Donald Teasdale (1993) and daughter, Joan (2015); brothers, Lawrence (Glennie Ells), Stewart (Kay), Fred (Donalda); and sisters, Doris (Robert) Miller, Ruth (Victor) Eye, and Pearl (Harley) Jodrey. She is survived by son, Gary; daughters, Brenda (Peter) Sheppard and Laura (Peter) teBogt; as well as granddaughters, Rachael and Kimberley Sheppard, Stacy, Susan (Fabian) Hamilton, Emily and Donna teBogt; great granddaughters, Taylor and Bronwyn. She is also survived by sisters-in-law, Margaret Teasdale, and Ginny (Clyde) Teasdale, and many nieces and nephews. Barb was working at the Royal Bank in Wolfville when she met Don Teasdale who was an engineer building the hydro power plant at White Rock, just below the Westcott family farm. They were married in 1952 and moved to Dartmouth the following summer where they lived for fifty years. Most summers were spent at the cottage at Evangeline Beach, and after Don passed away, Barb moved back to the valley. Barb made a home for her family wherever she was, producing feasts for all occasions. One fond memory was the smell of baking bread. Once she learned the recipe from her sister Ruth, there was always fresh bread. Her bread pans are a treasured inheritance. Her creative energy resulted in many hand knit sweaters, mittens and socks, crocheted garments and afghans, rug hooking projects, and most importantly quilts for all members of the family. Barbara was also an accomplished seamstress, making many tailored garments for herself, and for her children. She even taught herself to reupholster furniture. There was no textile challenge she wouldn’t take on. There will be a private service in Gaspereau Cemetery on October 19, 2021 when Barb will be laid to rest with her family. Donations in memory may be made to charity of one’s choice. Funeral arrangements have been entrusted to the White Family Funeral Home and Cremation Services, Kentville.