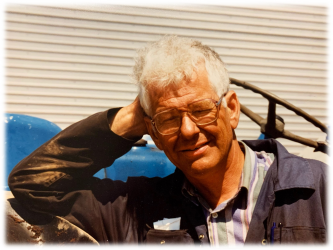 It is with a great deal of sadness that we announce the sudden but peaceful passing of our wonderful Husband, Father and Grandfather (Pake), Sipke "Sid" Kramer. Sid died at the age of 73, on November 15, 2021, in Valley Regional Hospital, Kenville, surrounded by his loving family. Born on June 12, 1948, in Berlikum, Friesland in the Netherlands, he was the youngest son of the late Metske and Maaike (Bruggenkamp) Kramer.

Sid grew up in the beautiful province of Friesland in a family of teachers. Although academic pursuits were not his passion, he spent a lifetime of exploration and learning, becoming very knowledgeable and skilled in so many subjects and trades. After finishing high school, he graduated from Horticultural College in 1968. Always hungry for adventure, he pursued an opportunity working for a Dutch seed company in Tanzania, East Africa. In 1971 he briefly returned to The Netherlands, married a teacher, Adriana, and whisked her away to Tanzania, to begin their many adventures together. Working with many growers, collecting prime bean and flower seed to export, he met many people and learned about many cultures.

Continuing the adventure, Sid and Audrey started their family during an outbreak of plague, with the birth of their first daughter (Janien). After four years in Tanzania their adventure took them to Turkey where he continued to work in the seed growing business. In 1976 they were drawn to Burkina Faso, West Africa where Sid led a development project growing tomatoes to develop a local export of tomato paste. During this time, they welcomed the arrival of triplets, two sons and a daughter, with one son passing away within a few days of being born. After two years Sid had the urge to continue the adventure in the promising land of Canada where he could start his lifelong dream of growing plants, owning a thriving farm, where kids could be well educated and thrive in a healthy climate.

The ticket into the country was working as a manager at Asgrow Seed Company. This allowed him to travel all across the country selling seed to a variety of large vegetable growers. This led to the next adventure. He discovered an opportunity to start his dream of a vegetable growing business. He pioneered growing vegetables on a peat bog and was the first grower in Nova Scotia to grow acres of onions from seed. He farmed lettuce and exported onions for 20 years. This career allowed him to develop his amazing skills in mechanics as he was able to fix and rebuild almost anything. Even after an accident had caused him to lose several fingers, he chose to live and work circles around everyone; he was never disabled.

After retiring from fulltime farming, Sid and Audrey flew back to East Africa. They spent 3 years living out of a suitcase, experiencing danger and sickness but never stopping. With the CRWRC, led several local farmers in many communities in Uganda, Tanzania and Kenya to grow a high protein crop of amaranth so that the people had nutritious food to eat and a cash crop. Many AIDS victims were able to extend their life expectancy and quality of life because of this project.

In 2010 Sid returned from Africa and continued to enjoy working and helping many around him. He could be found developing his passion for growing his garden, volunteering in the Open Arms shelter, fixing machines, draining water from yards, renovating lawns and gardens, and giving lots of advice, even when it wasn’t asked for.

Sid always looked forward, without fear. He had great vision for large projects, and the patience and energy to follow them through. He thrived in the face of danger, and enjoyed the challenge of working through life’s obstacles, rarely complaining and counting it all as adventure. His love of nature and God’s magnificent creation was matched by his great love of his family and friends. He appreciated the uniqueness of every person and how God made them.

Sid's life was not without challenges. One accident almost took his life, instead it brought him to know his Lord and Saviour, Jesus, who gave him new life. Sid lived a life of love and strong faith. He knew God’s mighty hand was guiding him. He would spend many hours praying for people and seeking God’s wisdom. He was a sinner but understood God’s amazing forgiveness and accepted it. He also learned to forgive himself and others. Sid is known to tell people not to fear. He was ready to meet his loving Heavenly Father, he was not afraid to die. We are thankful for this, but we will miss him so much.

Visitation will be held on Saturday, November 20, 2021 from 6:00 – 8:00 p.m. in the White Family Funeral Home, Kentville. The funeral service will take place at 3:00 p.m. on Sunday, November 21, 2021 in New Covenant Community Church, Cambridge with a livestream of the service available at that time. A private family interment will take place in Pleasant Valley Cemetery. In accordance with the Nova Scotia Proof of Full Vaccination Policy, proof of full vaccination will be required to attend visitations, services and receptions held in or by the White Family Funeral Home. Donations in memory may be made to the Valley Care Pregnancy Center, Open Arms – Coldest Night of the Year or the Berwick Food Bank. Funeral arrangements have been entrusted to the White Family Funeral Home and Cremation Services, Kentville. To view the livestream and for on-line condolences please visit: www.whitefamilyfuneralhome.com.