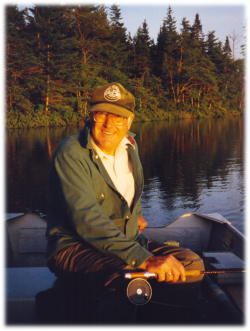 Hugh passed away at Valley Regional Hospital on November 16, 2021, in his ninetieth year. He was born in Wolfville, January 10, 1931, son of Ethel and Leslie Fairn.

Hugh attended Wolfville Schools and Acadia University, where he met Evelyn, the love of his life, and wife of sixty-nine years. Throughout his school years he was active in many community and varsity athletic programs. After graduation with Bachelor degrees in Arts and Education, he taught school in Kentville, before joining his father's architectural firm. Later, he became involved in real estate development, then went on to establish Kings Kable Ltd. in the early 1970's.

Hugh maintained a lifelong interest and involvement in forestry and wildlife conservation, which led him to serve in many local, provincial, and national organizations in support of the wise use of natural resources. Among those, he was former Vice-president, Director, and Life Member of Canadian Wildlife Federation; former President of Nova Scotia Wildlife Federation; Director and Director-Emeritus of Ducks Unlimited Canada; founding Director of Clean Nova Scotia Foundation; member of NS Provincial Wildlife Advisory Council; Chairman of NS Provincial Forest Practices Improvement Board.

Hugh was always active in his community and his church. He was former Chairman of Eastern Kings Memorial Hospital Corporation and served as a trustee and Advisory Board member of the E.KM. Health Foundation. He was for twenty-five years a member of the N.S. Voluntary Planning Board. Always an Acadia man and active Alumnus, he served on the Board of Governors, and was Life Treasurer of Class of 1952. As a life-long Rotarian, he was honoured as a Paul Harris Fellow. In 1993, he received the Canada 125 Medal, and in 2012, he was awarded the Queen Elizabeth II Diamond Jubilee Medal.

Among Hugh's most cherished times were when he was with family or friends while enjoying the outdoors, savouring the natural world around him. He loved his family and was always a central figure of energy and good humour at any gathering at home, at Lumsden, or at Quilty.

Special thanks to the Valley Regional doctors, nurses and various staff members for care during his stay in the hospital. Cremation has taken place. A Memorial service will be held at 2:00 p.m. on Thursday, November 25, 2021 in Wolfville Baptist Church, Wolfville. In accordance with the Nova Scotia Proof of Full Vaccination Policy, proof of full vaccination will be required to attend visitations, services and receptions held in or by the White Family Funeral Home. A private family graveside service will take place at Willow Bank Cemetery, Wolfville. Donations in memory may be made to Acadia University or Ducks Unlimited. Funeral arrangements have been entrusted to the White Family Funeral Home and Cremation Services, Kentville.