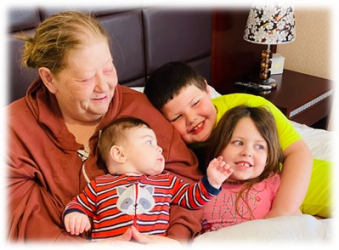 It is with the heaviest heart that we announce the passing of Robin Christine Whiston (Crouse), of Kingston, Nova Scotia passed peacefully and is finally no longer in pain.

Robin is survived by husband, Daniel (Danny) of 35 years, her biggest supporter and absolute love of her life. They shared a love one can only dream about. The kind love stories are written about.

Robin is also survived by son, Robert and daughter, Katie (husband, Hal Reeves), of Somerset; of whom she also shared the most beautiful friendship; grandchildren, Elliott, Elise, Elijah, all of Somerset and granddaughter, Paige of Kennetcook; brothers, Douglas, his children Darren, Dana, Lacey, Jillian; Michael, his children Kyisha, Tanika and Shayla; Rick (Tammy), of Wolfville, their children Nicky and Johnny (Marley); Steven "Rooster" (Dawn), of Wilmot, their children Kayla and Amber; and sister, Cindy (Wayne), of Freeport.

If you had the privilege of knowing Robin, you were lucky. She was always willing to open her home, and her heart to anyone in need. Robin devoted her whole life to being a stay-at-home mom, and wife to Daniel (Danny) manning the house and 3 kids while he worked on the road and later devoted herself to being an even better grandmother to her 3 babies: Elliot, Elise and Elijah. Although, unable to meet baby E, the newest edition waiting to be loved, anyone that saw the light in Robin’s eyes with her grandchildren know he would have been spoiled too.

Robin was fierce, witty and had a fiery red headed personality. She was the aunt and mom that had it all; housing many a house party to make sure her teenage children and nieces and nephews had a safe place to gather. Filling us all with overflowing memories of happy times with "Aunt Robin", sometimes lovingly being teased by being called "Aunt Bunny".

Robin’s house was a judgment free zone, a place you were free to be you. Happy, sad or downright messy. She loved you anyway you came. Usually with a hot ham and scallop potato dinner, or her famous meatloaf she often made double and triple batches of because at the hands of Katie and niece, Amber the entirety of one got eaten and she never let them live it down.

Anyone that knew her, know that the importance of family and friends made Robin’s whole world turn. She loved nothing more than daily chats and visits with daughter Katie and her children. Robin’s greatest joy was being a "Nan", spoiling them beyond belief and sending them home was the game.

Due to Covid restrictions there will be no funeral service. Donations in Robin’s memory may be made to the Kidney Foundation of Canada. Funeral arrangements have been entrusted to the White Family Funeral Home and Cremation Services, Kentville.

Click here to View Condolences
Service Location
Due to Covid restrictions, there will be no funeral service.
Requested Charity
Kidney Foundation of Canada