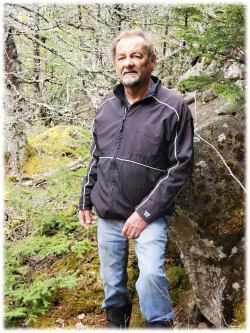 On January 26, 2022 at the age of 73, Chester Eric Lent of Coldbrook, passed away at the QEII- Halifax Infirmary. Born on Briar Island, he was the son of the late Donald Wickerson Lent, Briar Island and Madeline Penelope Doty Lent, Weymouth North.

Dad worked as a mechanic for most of his career retiring from MacPhee Pontiac as the foreman mechanic. Dad enjoyed hunting and fishing and his time on the island, especially Whippers Point, Dad had such a passion for nature especially birds and loved to educate anyone who would listen.

Dad loved his children and four granddaughters more than life, for dad did everything in his every breath to love and live for his family. Whether it be hunting and fishing with Clarke, to antique car shows and Sunday suppers with Natalie, to bird watching with Erica, to in depth conversations about the world over coffee with Larissa, to hunting and fishing with Cassidy, to long drives and chats about life with Maddy. Dad found love late in life that put such a beautiful sparkle in his eyes and for this Lila we will be forever grateful.

Dad was told at the age of 27 to sell his motorbike due to his kidneys or he would not live past 6 months [he bought a bigger one] and after 3 kidney transplants and various other major health issues that came along, did he ever prove the power of positivity works and that was his motto. People would often say ‘wow 20 years of dialysis, 3 transplants and so much more how do you stay so positive’ and his answer would always be "I have two great kids, four amazing granddaughters and a fishing rod what more could one ask for".

Dad would often speak to university students about organ donation, support new patients on dialysis whether it be to tell them what to expect or there to just listen, each year he also, along with his four granddaughters, would make his mother’s famous egg tarts that they would take to the dialysis nurses and in his memory, we continue this tradition. The one thing dad would be too modest to mention is his Unsung Hero award he received from the Kidney Foundation of Canada for all his hard work. Dad has impacted so many people near and far and has made lifelong friendships which he considered them all as family.

What we wouldn't give for one more of dad's long hugs, interesting stories, [fact or fiction] or silly jokes but we know heaven has gained an angel who will watch over and protect everyone who had the honor to be loved by him.

Special thank you to the amazing support from Dr. Adam Clark, Dr. Marni Goodman, and the nephrology team at the QEII who dad spoke very highly of.

In keeping with Dad's wishes there will be no visitation or service. A celebration of life will be held from 2-5 p.m. on August 6, 2022 in the IOOF Hall on Briar Island. A memorial bench will be placed on the island in Dad's name, a place to sit and embrace the beauty of life.

>Click here to View Condolences
Service Date
Saturday, August 6, 2022
Service Time
2-5 p.m.
Service Location
A celebration of life will be held in the IOOF Hall on Briar Island.
Visitation
There will be no visitation, by request.
Requested Charity
Islands Historical Society – SAIL2 - see obituary for details