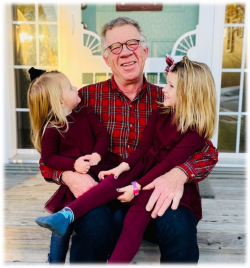 Frank Alexander ‘Alex’ Crouse, of Port Williams, passed away suddenly on April 6, 2022, at the age of 60. He was born in Wolfville on February 24, 1962. Alex was the loving husband of Heather (Shaffelburg), and the father of Brian (Laura), Kentville; Ben (Kyla), Lower Sackville; Sarah (Mark) Townsend, Middle Sackville; and Jenny, Bedford. He was the devoted grandfather of Ella, Olivia and Finn. Alex was the beloved son of Harry and Beth Crouse, Folly Lake; and son-in-law of Margery (Budd) Shaffelburg-Miller, Port Williams. He was brother to Susan (John) Crompton, Moncton; Mark, Port Williams; Peter (Heather), Margaretsville; and Matthew (Laura), Toronto. He was a brother-in-law to Michael (Linda) Shaffelburg, Port Williams; Paul (Reni) Shaffelburg, Bedford; and Ann (Dave) Greener, Port Williams. He is also survived by many nieces and nephews. Alex was predeceased by his father-in-law, David Shaffelburg.

Born and raised in Port Williams, Alex dedicated much of his life to the growth and development of agriculture in the area. He was a graduate of Horton High School, (Class of ’80), the Nova Scotia Agricultural College, Truro (Class of ’82) and MacDonald College, Montreal (Class of ’84) with a BSc in Horticulture.  As a teen he was an avid swimmer and spent many years as a lifeguard and swim instructor. He spent most of his career with DuPont Canada as a Regional and National Sales Manager in their Agriculture Division, where he created lasting connections across the country. He loved to give back to his community, enjoying his time as a sheep project leader with 4-H Nova Scotia, various committees within the Port Williams United Baptist Church, and as a dedicated leader with Scouts Canada for many years.

Upon his retirement, he founded Wood ‘n’ Hive Honey with his loving wife of 36 years, Heather and his honey products and bees were second to none. His passion and drive for beekeeping was infectious, and he loved to share his knowledge with anyone who took the time to stop by the shop. Besides the 300+ colonies he established in his own 15 bee yards, he took great pride in raising new colonies for other beekeepers, both new and old. These now reside across Nova Scotia and PEI with their happy owners. Alex was the president of the Nova Scotia Beekeepers Association and formed many friendships with beekeepers throughout the province.

Alex had many passions in life, most of which involved being out in nature. He loved to camp, was a talented woodworker, a ‘jack of all trades’ handyman, and an expert storyteller. He was the life of any party and had an incredible sense of humour. Above all, Alex will be remembered as a loving husband, father, and grandfather, who would do anything for his family. He was the biggest supporter and loudest advocate for his children and grandchildren and their accomplishments, and will be greatly missed by all who knew and loved him.

Family and friends are invited to the Port Williams United Baptist Church on Wednesday, April 20 at 4 p.m. for a Celebration of Life service, with a reception to follow. Masks are strongly recommended please. For those unable to attend, a video webcast of the service will be available on Thursday, April 21 at 4 p.m. Cremation has taken place and interment will occur at a later date.  In lieu of flowers, a donation can be made in Alex’s honour to either the Nova Scotia Beekeepers Association Education/Research Fund, Dalhousie University Agricultural Campus, Truro or a charity of your choice.  Funeral arrangements have been entrusted to the White Family Funeral Home and Cremation Services, Kentville. To view the video webcast and for on-line condolences please visit: www.whitefamilyfuneralhome.com.

"Telling the Bees" - There is an ancient British/Celtic tradition that whenever there was a death in the family, someone would go to the hives and tell the bees. Failing to do so could result in further losses, death or illness to the bees themselves. This also included happier events like births, marriages and long journeys. This custom was known as "telling the bees".  Alex’s bees were so important to him; over the next few weeks we will be following this tradition and visit all of his bees to share this sad news. Bees learn to visually recognize those who care for them. If you also have some of his bees and want to do the same, he would be so honoured and we would be so grateful.