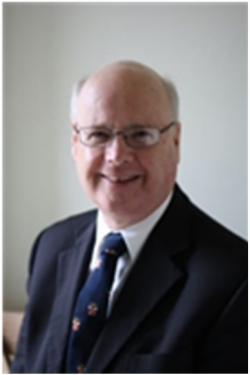 Note: Masks are required. Seating up to 120 persons will be available in the Chapel sanctuary.

Additional seating will be available at Wolfville Baptist Church with live-stream of the funeral service.

The service will also be live-streamed on YouTube, accessible by visiting chapel.acadiau.ca

The Reverend Dr. Roger Howard Prentice, a man of distinction and beloved by many for his kindness, probity, and sense of joy, died at home on April 8, 2022, at the age of 78. Born in Saint John, NB, he grew up in Halifax where he and his family were active in First Baptist Church. After receiving his BA from Dalhousie University in 1966, Roger went on to Acadia University, graduating with the BD degree in 1969. This began a life-long connection with Acadia that was recognized in 2008 when he received the degree Doctor of Humanities, Honora Causa, as a "dedicated scholar, friend, servant of and ambassador for Acadia University."

Roger had student pastorates in Advocate Harbour/Apple River and Truro Heights. In September 1969 he was ordained by First Baptist Church Halifax and became the Assistant Minister and Minister of Christian Education in First Baptist Church Amherst. Through camping, directing plays, managing a Church League hockey team and indefatigable outreach, Roger impacted many young people with whom he maintained contact for the rest of his life. This focus on providing interactive opportunities for spiritual reflection and growth became a pattern for very successful ministries in Baptist Churches in St. Stephen, NB and Annapolis Royal, NS, culminating in his outstanding service to Acadia as University Chaplain for 22 years. Through daily services, annual Passion Plays, attendance at university events, sensitive counselling and his personal example of integrity, spirituality and Christian love, Roger made a significant and lasting contribution to the lives of thousands of students as well as staff.

Prior to coming to Acadia, in 1979, Roger began four years of study at Regent's Park College, Oxford, focusing on Baptist Church history, which led to another large circle of friends with whom he was in regular correspondence enhanced by occasional visits. His scholarly activity endured throughout his life. He read deeply and widely and wrote many articles and books.

Roger was an active member of the Wolfville Baptist Church, the Wolfville and Area Interchurch Council, the annual Christmas "Fezziwig" production, as well as offering advice, counsel, lectures, and sermons at a variety of Churches in Nova Scotia and beyond. He helped found the Atlantic Baptist Fellowship (now the Canadian Association for Baptist Freedoms), which he served as President, Bulletin Editor and Credentials Committee Chair. For many years he was Chaplain to the Wolfville Royal Canadian Legion, Branch 74.

Roger’s contribution to community was recognized in the bestowing of two important awards on him: the Queen's Jubilee Medal, 2012 and the Senate of Canada Sesquicentennial Medal, 2017.

After retiring, Roger concentrated his scholarly research in the Baptist Archives at Acadia which led to several publications. He submitted the draft of his most recent book to the publisher only a few days before his death. Many of his friends treasured another retirement project – the annual arrival of the Christmas publication of his "Mildred" stories.

Roger was predeceased by his parents, Percy and Myra (Long) Prentice, and by his fiancée, Leanne Oickle. He is survived by several cousins.

A funeral service will be held on Thursday, April 21, 2022 at 2:00 p.m. in Acadia’s Manning Memorial Chapel with a reception to follow at Fountain Commons Hall. Burial will take place in Wolfville’s Willowbank Cemetery. Memorial donations may be made to the Manning Memorial Chapel Endowment Fund or a charity of your choice. Funeral arrangements have been entrusted to the White Family Funeral Home and Cremation Services, Kentville.