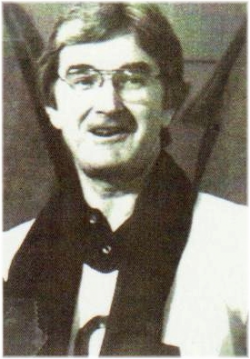 It is with a great deal of sadness that we, the family of Burton Leroy Russell, age 87, announce his passing on April 26, 2022 in the Valley Regional Hospital, Kentville.

Born in Kentville on December 11, 1934, he was the son of the late Frank and Lillian (Vidito) Russell of Kentville. Burton was the youngest in a family of 13 and he remained in the family home on Oakdene Avenue until surgery resulted in assisted living being required, which he received at Kings Riverside Court in Kentville.

Burton lived a very productive life having graduated from Kings County Academy followed by graduation from Acadia University in 1957. He taught Physical Education at Clark Rutherford Memorial on the Cornwallis Naval Base during the 1964-65 academic year. The years following were spent as English teacher and athletic coach in Kings County School System, retiring at the conclusion of the 1992-93 academic year from KCA.

Burton has had a lifelong interest in the sports history of his native province which has resulted in the production of 14 books. He was also honoured by being selected to the Acadia Sports Hall of Fame in 2000 and to the Maritime Sports Hall of Fame in 2015 as a builder-historian. He served for thirty years as statistician for the Nova Scotia Senior Baseball League. Leisure time was spent on the golf links. He was a member of the Orchard Valley Pastoral Charge, United Church of Canada.

Cremation has taken place and there will be no visitation, by request. A celebration of life will be held on Thursday, May 12 at 2:00 p.m. in the White Family Funeral Home, Kentville. For those unable to attend, a video webcast of the service will be available at that time. Interment will take place in the Elm Grove Cemetery, Steam Mill.

Donations in memory may be made to Orchard Valley Pastoral Charge or a charity of your choice.

Funeral arrangements have been entrusted to the White Family Funeral Home and Cremation Services, Kentville. For online condolences, inquiries and to view the webcast, please visit: www.whitefamilyfuneralhome.com.