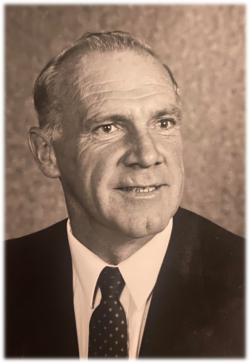 Leslie Leroy Hutchinson, 85, of Canaan Heights, formerly of Halls Harbour and Morristown, all in Kings County, passed away suddenly at home on Tuesday, May 3, 2022. Born on January 24, 1937 in Berwick, Kings County, he was the son of the late Hartley and Lalia (Nichols) Hutchinson. Leslie left Berwick to work in construction in Kitimat, BC and then in Prince Rupert, BC, where he married his wife, Jackie. Together they went to the Okanagan for a short time, returning home to the family farm in 1960 at which time it was incorporated and became Mountain Crest Farm.

Cremation has taken place. There will be no visitation, by request. A gathering of family and friends will be held from 1:00 – 2:30 p.m. on Monday, May 9, 2022 in the White Family Funeral Home, Kentville. A private family burial will take place in the Morristown Cemetery. Family flowers only, by request. Donations in memory may be made to the Heart and Stroke Foundation or a charity of choice. Funeral arrangements have been entrusted to the White Family Funeral Home and Cremation Services, Kentville. On-line condolences and inquiries may be directed to www.whitefamilyfuneralhome.com.