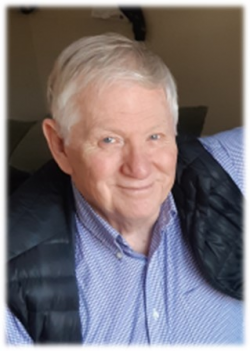 Captain George Milton Anderson – of Kentville, passed away suddenly on Thursday, August 4, 2022 in the Valley Regional Hospital, Kentville. Born in New Glasgow, he was a son of the late Lloyd and Thelma (MacKinnon) Anderson. Captain Anderson was a Master Mariner Foreign Going. He started going to sea when he was 18, a messman on the Gypsum Dutchess. When he obtained his Master Mariners ticket he was the youngest and received the highest marks in Canada. He was awarded a prize by the Company of Master Mariners. He sailed various vessels all over the world including gypsum boats, oil tankers, towed barges and offshore supply ships. He taught at the NSCC Nautical Institute in Port Hawkesbury. Then George worked as a mooring master and pilot in Libya for 9 years. He later went to work with Transport Canada Atlantic Region Marine Safety for 17 years, where he was still employed at the time of his death. George was president of the Kings County Photography Club, a Life Member of the Nova Scotia Mustang Club and a member of the Mustang Club of America.

Cremation has taken place and there will be no visitation by request. The funeral service (with a video webcast) will be held at 3:00 p.m. on Thursday, August 11, 2022 in the White Family Funeral Home, Kentville. Burial will take place in the Elm Grove Cemetery, Steam Mill, Kings County.

Donations in memory may be made to Mission to Seafarers or a charity of your choice. A special thanks to the emergency response, emergency department and ICU teams at Valley Regional Hospital. Funeral arrangements have been entrusted to the White Family Funeral Home and Cremation Services, Kentville. For online condolences, inquiries and to view the webcast, please visit www.whitefamilyfuneralhome.com.