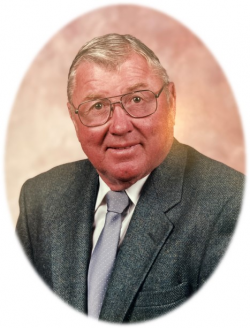 Haliburton, Richard "Dick" Webster – Avonport, passed away peacefully on Wednesday, September 14, 2022 at Valley Regional Hospital in Kentville. Born May 1, 1932, he was the son of the late Edward and Jean (Tattrie) Haliburton.

Dick lived almost his entire life on the family farm. He left after graduating from Wolfville High School to attend Nova Scotia Agricultural College and McGill University’s Macdonald College. He then actively ran the farm until a few years ago, though he continued to have a say in its operations and remained a respected member of the farming community. Despite living in the same home from his birth, he was well-educated and had travelled extensively. Dick had a broad range of interests and a wide circle of friends. Until his final day, he continued to expand his knowledge of local and world issues and events, relying on calls and visits from family, friends, and various news media to keep up to date. His presence in our lives will be sadly missed.

Dick is survived by his sons Matthew (Lisa), Sandy Point, and Noel (Lucy), Avonport; his grandchildren Claire, Toronto, Liam, Ottawa, and Joshua, Avonport; his brothers Gordon (Edith), Wolfville, and Charles (Margaret), Digby; his sister-in-law Mable, Wolfville; as well as numerous nieces and nephews. He was predeceased by his wife, Lesley (Balcom), his partner Lyn Hayes, his brothers Jock and Tom, and his only daughter Barbara. He was also predeceased by his brother-in-law and sister-in-law, Bruce and Shelagh Addison, and his sister-in-law Patricia Haliburton.

Respecting Dick’s final wishes, his remains have been donated to Dalhousie University’s Faculty of Medicine and there will be no funeral service. A private interment will take place at a later date. Memorial donations may be made to a charity of your choice. Arrangements have been entrusted to White Family Funeral Home in Kentville, where you may leave messages of condolence at www.whitefamilyfuneralhome.com.