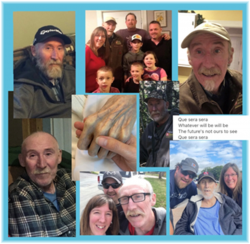 Anthony "Tony" Lorne Bent, age 71, of Kentville, passed away peacefully with his children by his side on Wednesday, September 14, 2022, at the Valley Regional Hospital, Kentville.

Tony was born on February 15, 1951, in Middleton, NS. He was the son of the late Carroll and Bertha "Ruby" Bent. He grew up in his family home in Beaconsfield, NS, where he worked alongside his father and siblings on the family farm. He attended Bridgetown Regional High School and went on to complete his carpentry trade education from the Middleton Community College. From there, he started his first job at the local hardware store, Bridgetown Enterprises. It was also in Bridgetown where Tony found his first passion, bowling, while securing employment at the Bridgetown Bowling Alley.

His life-long passion for bowling continued when he moved to the Kentville area. He was employed as a mechanic at Fairlane’s Bowling Alley, New Minas for 19+ years. It was here that Tony was a member of many bowling leagues and tournaments. One of his many bowling achievements included representing Canada at the World Bowling Championships in Maine, USA and again, 30 years later with his son as his teammate. From there, Tony worked for Baxter’s Dairy in Kentville as a merchandiser.

Tony had an impeccable work ethic and was always considered a dedicated and invaluable employee. There was no question that work was his second passion. He worked for many years painting in Calgary, Alberta. He retired from his painting/carpentry career in 2020 after dedicating 10+ years working for his son’s company, Bent’s Contracting.

Tony thoroughly enjoyed hunting and fishing with his father and son. One of his fondest memories was having the opportunity to go trout fishing with his dad in Labrador. He was an avid golfer, pool player, and dart player. He grew up playing nightly card games and crokinole with family and friends. In his later years, Tony became a die-hard fan of the Calgary Flames.

Tony loved his family. "Bubba" was very proud of his four grandchildren. He treasured family gatherings with music and singing. He particularly loved Johnny Cash’s music. It wouldn’t be uncommon for Tony to pick up a guitar or the spoons and play along wherever he was. He was an entertainer and had a great sense of humor.

Besides his parents, he was predeceased by an infant sister, Donna Lee Bent, a niece Kimberly Williams, and nephew Nathan Bent. Cremation has taken place and there will be no visitation upon request.

A private graveside service will be held in the Hampton Cemetery in Annapolis County. Donations in memory may be made to the Valley Regional Hospital Foundation. Funeral arrangements have been entrusted to Whites Family Funeral Home and Cremation Services, Kentville.

"Que sera, sera!
Whatever will be, will be!"

>Click here to View Condolences
Service Location
A private graveside service will be held in the Hampton Cemetery, Annapolis County.
Visitation
There will be no visitation, by request.
Requested Charity
Valley Regional Hospital Foundation