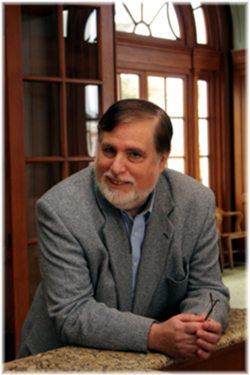 Born in 1948 in Washington, DC, Bill grew up attending Landover Hills Baptist Church and graduated from Gabriel DuVal Senior High School in 1966. Bill went on to earn a Bachelor of Arts (Honors) from the University of Maryland (College Park, MD) in 1970, an MA in Religion from The Eastern Baptist Theological Seminary (Philadelphia, PA) in 1972, a second MA in History from Temple University (Philadelphia, PA), after which he earned his Doctor of Philosophy (with distinction) in 1976.

In 1970, he married Kathryn Godfrey Edens of Landover Hills, Maryland.

Bill was ordained a Baptist minister in 1971, an elder in the United Methodist Church in 1976, and he carried recognition in the Wesleyan Church for many years. Throughout his life, he delighted serving as a pastor in Baptist and United Methodist churches in Texas, Pennsylvania, Washington, DC, New York and Nova Scotia.

The author of over 40 books and numerous other publications, Bill was a distinguished and prolific scholar in the fields of Baptist Studies Post-Reformation Theology and Ethics, including Anabaptist Studies and the Radical Reformation. He made contributions in the areas of Human Rights and Global Ethics from a Free Church perspective. He served in numerous academic and administrative roles in his long career, including as Assistant Professor at Houghton College in Houghton, NY, Associate Professor of Church History at Colgate Rochester Divinity School in Rochester, NY, Executive Director of the American Baptist Historical Society in Rochester, NY, Archivist of the American Baptist Churches USA in Valley Forge, PA, Vice President and Dean, and Professor of History of Christianity at Eastern Baptist Theological Seminary in Philadelphia, PA, Principal and Dean of Theology at McMaster Divinity College, McMaster University, in Hamilton, ON (1989-2000), Chair of the Department of Religion and Professor of Religion at Baylor University in Waco, TX (2000-2006), Distinguished Professor and the first occupant of The Millard R. Cherry Chair in Christian Theology and Ethics at Acadia Divinity College, Acadia University, in Wolfville, NS (2006-2017), where he was named Professor Emeritus, and the Pioneer MacDonald Professor of Baptist Theology and Ethics at Carey Theological College, University of British Columbia, in Vancouver, BC (2017-2019).

He was honored as a Research Fellow at several international institutions and served on the national boards and committees of the Canadian Council of Churches, the Churches Council on Theological Education, the Canadian Bible Society, the Baptist World Alliance (BWA), InterVarsity Canada and the Interfaith and Spirituality Network of Nova Scotia. Bill was a beloved professor and mentor who shaped the lives and careers of countless students across the world. His graduate students include professors and deans at colleges and theological schools, missionaries and pastors in various denominations and he mentored over thirty doctoral theses and dissertations.

Both personally and professionally, Bill was an avid traveller who relished learning about local cultures and history and exploring them with others. Closer to home, he enjoyed spending time at the family cottage on the Bay of Fundy shore and his hobbies such as driving his 1948 Ford N tractor, keeping current on world events, enjoying classic movies as well as an interest in trains and model railroads. Bill was a passionate student of his family’s histories and undertook a decades-long labour of love compiling detailed genealogies that he published for his loved ones to treasure and share in the years to come.

The family extends their heartfelt thanks to the nurses and staff of the Valley Regional Hospital in Kentville, NS and the Victoria General and Queen Elizabeth II Hospitals in Halifax, NS, with special gratitude to Dr. Melissa Broaders, Dr. Michael Mulherin, Dr. Jack Rasmussen and Dr. Robert Raskin, who provided Bill with such compassionate care in his final days. The funeral service will take place at 2:00 p.m. on Thursday, November 17, 2022 in Wolfville Baptist Church, 487 Main Street, Wolfville, NS, B4P 1E3. Memorial donations may be made to the Wolfville Area Food Bank, the Wolfville Baptist Church Deacons Discretionary Fund or a charity of your choice. Funeral arrangements have been entrusted to the White Family Funeral Home and Cremation Services, Kentville.