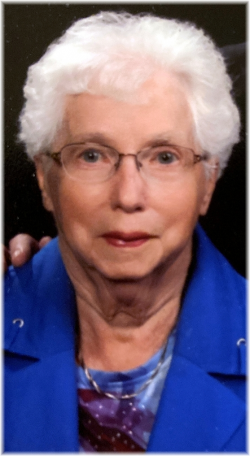 Lois May Loraine Forsman (nee Anderson) died peacefully on Sunday, October 16, 2022 in the Wolfville Nursing Home in Wolfville, Nova Scotia at the age of 89.

Lois was born on August 2, 1933 at the farm of her pioneer parents, Inga Aasen and Karl Anderson, west of Congress, Saskatchewan. Lois had three brothers, Herman (deceased), Clarence (deceased), Gordon (deceased) and one sister, Evelyn (Karasinski).

Lois attended elementary school and high school in Congress and Assiniboia, and excelled in all her studies. Lois then earned her teaching credentials from Saskatchewan Teachers College in Moose Jaw, and taught all grades in a one room school in Saskatchewan. Lois later attended a Baptist Leadership Training School in Calgary, Alberta where she met Rodger Forsman. After B.L.T.S, Lois returned to Saskatchewan where she continued to teach and married Rodger Forsman on July 28, 1956 in Congress, Saskatchewan. In 1959 they moved to Hamilton, Ontario where Lois taught Grade 1 at Hamilton inner city schools. In 1971, the family moved to Wolfville, Nova Scotia, where Rodger taught at Acadia University. In 1980, Lois earned a Bachelor of Arts in History from Acadia University. Throughout her life, Lois was actively involved in many church and community activities, including helping with the welcome of Vietnamese asylum seekers. Lois was an avid reader and helped many students overcome their challenges in reading and writing. She joined the University Women’s Book Club and volunteered to price books for the Canadian Federation of University Women’s annual book sale, an endeavor which raised many thousands of dollars for scholarships.

Cremation has taken place. A service of Thanksgiving to God for the life of Lois Forsman will be held at Wolfville Baptist Church on Monday December 5, 2022 at 2:00 p.m., Reverend Scott Kindred-Barnes officiating. Memorial gifts may be made to the Manning Memorial Chapel Endowment Fund or charity of your choice. Funeral arrangements have been entrusted to the White Family Funeral Home and Cremation Services, Kentville. Online condolences and inquiries may be directed to www.whitefamilyfuneralhome.com.