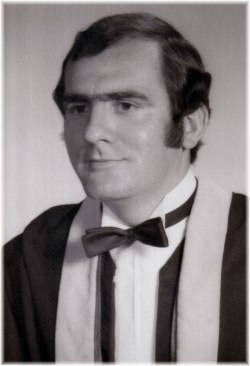 Michael Neil "Mikey" MacNeil died peacefully at home with his wife, Lorna, at his side on Monday, November 21, 2022. A longtime coach and educator in the Annapolis Valley, Mike lived his life full of love, quiet strength, and dry wit.

Born in Whitney Pier, NS in 1945, Mikey was the fourth of 10 children raised in the Ashby neighbourhood of Sydney, NS. An air cadet and late-blooming athlete at Sydney Academy, he excelled at baseball, basketball, and soccer, leading to an interest in physical education that diverted him from the Air Force to the Nova Scotia Teacher's College in 1964. It was there, in Truro in 1965, that he gave a lift to friends and picked up a young Lorna Banks from Hantsport, another TC student. They married in their adopted home of Wolfville in 1971.

After Teacher's College, Mike became the first physical education teacher at Hantsport School before heading to Xavier College and then St. Francis Xavier University in Antigonish, where he put his athletic skills to use playing varsity soccer and garnering a Bachelor of Science in Physical Education. It was an experience and degree of which he was exceptionally proud, leading to lifelong support for his fellow X-men and X-women wherever they played.

Upon graduation Mike, and eventually Lorna, took a job with the remarkable staff of Horton High School in 1971, with a lively young cohort of enthusiastic teachers, many of whom became their closest friends. Mike coached multiple sports at Horton, most prominently as head coach of the senior boys' soccer team, from 1971 to 2006. His strong, determined soccer teams finished runner up in the provincial final numerous times, yet Mike was never bitter, instead focusing on next season. He was inducted into the Horton Sports Hall of Fame in 2004 and received Dr. Hugh Noble Hall of Honour in 2017.

After 29 years teaching, Mike took early retirement in 1998 and devoted time to his second love, golf. Early morning weekday rounds at Ken Wo with his retired teacher friends were religiously attended. His consistent drive and careful putting led him to an eventual 6 handicap. In 2006, Mike organized a week-long pilgrimage with 11 buddies to the home of golf that would be among his fondest memories. After Lorna retired in 2007, the pair spent nearly all their winters in Florida, golfing daily and enjoying visits from their two children and beloved grandkids.

Despite living with Parkinson's for more than 20 years, Mike never complained. Instead, he focused on what he did have - a loving marriage and happy family, walks with Lorna, and unlimited rounds of golf at Ken Wo. His final round on the course, and in life, was with Lorna at his side. He was a proud and gentle father and grampy. A life well led; he is dearly missed.

Cremation has taken place and there will be no visitation, by request. The funeral service will be held at 2:00 p.m. on Tuesday, November 29, 2022 in the White Family Funeral Home, Kentville, Father John MacPherson officiating. The family has requested that masks be worn. A livestream of the service will be available at that time. Burial will take place in the Willow Bank Cemetery, Wolfville. Donations in memory may be made to KidSport Nova Scotia, the Valley Regional Hospital Foundation, or Parkinson Society Nova Scotia. For online condolences, inquiries, and to view the webcast, please visit: www.whitefamilyfuneralhome.com.