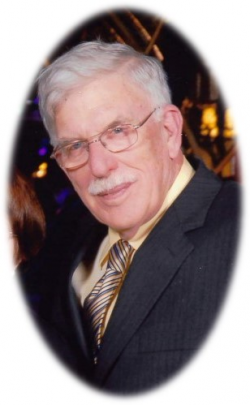 On Saturday, November 12, 2022, Walter (Roy) Quartermain left his earthly home to be with God and those who passed before him, especially his beloved daughter, Jennifer (November 22, 1997), his pride and joy.

Loving wife of 56 years, Betty, along with "his youngest" sister, Hazel, her husband, Michael, and our Saturday volunteer, Cleo, were beside his bed at Valley Hospice, a compassionate, caring environment for end-of-life days.

Roy was born in Lake Harbour, Baffin Island, Northwest Territories where his dad, Reverend Henry Clifton Quartermain (deceased 1971) was an Anglican priest and his mom, Helen Roy (Hutcheson) (deceased 2007) was the Community Health nurse. At age four, Roy bravely moved for medical reasons, and to start his schooling in Hamilton, Ontario and live with his uncle Sam and aunt May, leaving mom, dad and siblings in the North.

Although family was small in number and spread coast to coast, they were very welcomed in our home and was always important to go visit them.
The Quartermain family moved to Upper Falmouth, Nova Scotia, and later to New Waterford, Cape Breton, where Roy continued his education.

Roy graduated from Nova Scotia Agricultural College, Truro, where he met his future wife, Betty (Wells), attending Nova Scotia Teachers College. Those walks home from church to Betty’s boarding house and back to A.C. must have been very chilly in winters.

Pre graduation, Roy’s summer jobs included experience on a mixed farm operated by Andrew and Betty Hannam in Big Baddeck, and a landscaping company in Sydney.

Roy was well known and respected in the Annapolis Valley agricultural community, as his work career included managing a mixed farm that went into broiler chicken production for Dr. Henry Readon in Allain’s Creek, near Annapolis Royal, work at the Berwick and Port Williams Canada Packers Feed Mills, Chief Grand Grader at the Nova Scotia Grain Centre in Steam Mill, and work in Crop Insurance at the Nova Scotia Research Station. Roy was always dedicated to his job and went the extra mile.

Roy was a man of quiet faith and a member of Christ Church, Anglican, in Berwick, where he fulfilled many roles on Church Councils, including Warden, attending Diocesan Synod, and serving as a Lay Reader.

Perhaps it was the challenges and isolation of the Canadian North or the selfless example of his giving parents, Roy was committed to a life of purpose and never challenged, but faithfully supported, the time Betty and Jennifer spent on their community pursuits as he also was heavily and quietly involved in community volunteer work.

Under his chairmanship at the Cambridge Community Centre, they ran a day care, hired recreation staff for summer programs, and refurbished the sports field behind Central Kings Rural High School to include a regulation track, soccer pitch and baseball diamond. Floats were constructed for the Cambridge Princess entrant in Berwick Gala Days and a little welcoming ceremony for the Royal Party on the Community Tour.

Roy joined the Waterville and District Volunteer Fire Department and found his calling in the Radio Room where he and Brenda McCarrol spent fifteen years together doing the lengthy calls. Roy chaired many committees and his office work included keeping the computers maintained and upgraded, making the yearly schedules and identification cards, keeping the membership statistics for the annual report, tickets and posters, and designing and acquiring service awards. Being humble by nature, he often didn’t make himself a service award, but was proud and appreciative of the celebration the fire department gave to mark his thirty plus years of service on October 23, 2016. He was also proud of community support for the many fundraising projects and Your Warm Welcome at your door for the Fall canvass. And yes, he was on hand to assist the Ladies Auxiliary with their caterings.

Roy was an elected Village Commissioner for Cornwallis Square before the current Waterville and District Volunteer Fire Department building was constructed until his ill health forced his resignation. He was a former chairman and witnessed so much progress and growth over the years, including the current fleet of fire trucks maintained and replaced, to the current excellent compliment and the water reservoir erected and the training tower planned. Roy was also a Commissioner of Oaths.

Another community interest was health care. Roy was a past Chairman of the Western Kings Community Health Board, serving several terms. His belief in advocacy for greater community was demonstrated on a daily basis, consulting community and putting ideas into action. He enjoyed Provincial conferences where he learned from the other Health Boards. He was pleased that grant money helped others to start and maintain community projects and was proud of the useful medication record cards our group designed and distributed throughout the local community.

Between family, work and volunteering, there was little time for personal interests besides gardening, photography, musical presentations and theatre productions, useful woodworking projects including end tables, coffee tables, lamps, and a cedar chest - a gift for Betty, and the toll scenes that decorated his property during Fall and Christmas.

Travel was an important part of life. In early years, he was proud to attend the Boy Scout Jamboree in Ontario and later became a leader. Roy honeymooned in Niagara Falls and proudly introduced his new bride to his grandparents and the Hamilton clan. For work, he often attended the Atlantic Farm Mech Shows. He went to England for a conference and later, while Jennifer was with the Central Kings Tour to Eastern Europe, he and Betty explored the highlights of London, England and attended theatre productions. Hamilton was an annual visit as his mom returned to take care of her mom and dad. March breaks were spent in Disney World, Florida. When Jennifer graduated, our family flew to Calgary, visiting with sister, May, in Medicine Hat, and took a land tour through the Rockies, ending up with a short stay with sister, Bernice, in Victoria.

Roy was never happier than when family and friends visited and shared our table. Roy could cook and help out the busy household schedule but was a champion of Sunday dinner. To discourage snitchers from getting in the way of his meat carving, he invented the snitch plate, which was fair game. Whether he took you to the zoo, picked you up at the airport, or passing Jonny’s, ice cream was a necessary stop.

Trips to Newfoundland, Prince Edward Island, Cape Breton, Percé, Ottawa and Tabusintac were favourite destinations to catch up with family and friends and make memories. Cross-border shopping in Maine was a must to keep peace in the family.

After retirement, travel in earnest began. Travel with Dorothy O’Brien Tours and Collins Tours was like seeing the world with a large family. We covered most of North America from the Artic Circle, Yukon, Alaska, down the west coast to California to Texas and most states. Saint Pierre was interesting. Not only did we see the whales and polar bears in Churchill, but we stood in awe in the very warehouse from which the family’s annual provisions were sent North.

Some of our fellow travelers like Marge and Bert, and Edna and Bruce, became lifelong friend and we created our own memories travelling together.

Caribbean cruises offered stops in many hot spots as far as the Panama Canal and three stops in South America. We were honored to be included in destination weddings. Thanks Laura and Devin and Karen and Kris.

We explored Eastern Europe with tours of Ireland, France, Scotland, Switzerland, Germany, including Oberammergau Passion Play, Italy, Denmark, etc. as far as Russia, and did several European cruises. Fun to have friends around the world meet us in our hotel and take time to show us their local attractions.

Roy’s health had been steadily declining the past five years. Kindness and compassion shown to Roy and Betty was appreciated and cherished. Heartfelt thanks to special friends, including Stephen, Twila and Bob, Erma, Lynn, Patty, Betty K. Deb, Brenda M. and Brenda F. for their many services and errands, and Hazel and Mike for their true dedication and overwhelming support.

Calls to EHS and extended stays in Valley Regional Hospital in Emergency, on Med A and Med B met many caring medical professionals. Compassionate care from the Victorian Order of Nurses and Senior Homecare by Angels, Berwick allowed Roy to be cared for at home. Roy and Betty felt truly blessed to be among the angels of compassionate care who staffed the Valley Hospice for his final month. For each and everyone involved in his wonderful care, he was "duly truly" appreciative and thankful.

Funeral arrangements have been entrusted to the White Family Funeral Home and Cremation Services, Kentville, where online condolences and inquiries may be directed (www.whitefamilyfuneralhome.com). Cremation has taken place. Tentatively, Roy’s funeral service is scheduled for Monday, July 3, 2023 at Christ Church, Anglican, Berwick, Nova Scotia, with burial following in the family plot in St. Mary’s Anglican Cemetery, Auburn, Nova Scotia. Details will be published nearer to the date.

To remember Roy, a kind soul with a generous heart who enjoyed time spent with family and friends, random acts of kindness are appreciated, making the world a better place for all. Donations are welcomed for the Waterville and District Volunteer Fire Department, Christ Church, Berwick, the Valley Hospice Foundation, or a charity of your choice.

Helen Keller said, "With every friend I love who has been taken into the brown bosom of the earth a part of me has been buried there; but their contribution to my being of happiness, strength and understanding remains to sustain me in an altered world."