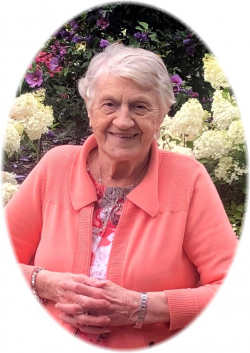 Hilda Mary (Pettipas) (Murphy) Dunn – formerly of New Minas and Antigonish, passed away peacefully on the evening of January 16, 2023, in Grand View Manor, Berwick, following a joyous 97th birthday celebration with her family. Hilda was born on January 16, 1926, in Tracadie, Antigonish County, to the late Walter and Mabel (MacKenzie) Pettipas.

Hilda married John Murphy on November 15, 1949. She spent her early years living in Cross Roads Ohio, Antigonish County, raising her family while embracing the farming way of life with her unwavering support for this lifestyle. Following John’s sudden passing Hilda met and then married Harold Dunn on September 20, 1974, and they moved and settled in New Minas.

Hilda devoted her life to her home and family. She found great joy when gathered together for a family meal, enjoying a cup of tea with a treat or two and engaging in lengthy conversations with those near and across Canada. With her sharp wit and big smile, she was sure to entertain a good laugh.

In addition to her parents, Hilda was predeceased in life by her husbands, John Murphy and Harold Dunn; sister, Theresa Taylor; brother, Frank Pettipas; daughter, Shirley Fraser; sons, Gerald, in infancy, and Russell Murphy; three grandsons and one great-grandson.

The family would like to thank Dr. Targett and the wonderful staff at Grand View Manor for the kindness and care they provided Hilda during the last two years.

A private family gathering will be held from 2:00 to 4:00 p.m. on Sunday, January 22, 2023 in the White Family Funeral Home, Kentville. The funeral service and interment will be held in the summer of 2023 in St. Joseph’s Roman Catholic Church and Holy Cross Cemetery, Kentville. Donations in memory may be made to the Alzheimer Society of Nova Scotia. Funeral arrangements have been entrusted to the White Family Funeral Home and Cremation Services, Kentville. On-line condolences and inquiries may be directed to www.whitefamilyfuneralhome.com.