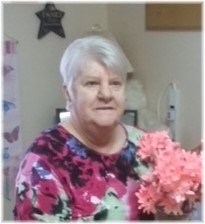 Linda Gail (Keddy) Ramey – Age 73, of Bridgetown, formerly of Berwick, passed away on Saturday, January 14, 2023 at Mountain Lea Lodge in Bridgetown. She was born on April 7, 1949 and was a daughter of the late Hilda (Lohnes) and Douglas Keddy.

Linda had an early career in nursing then dedicated the rest of her life to her family. She had a love of animals, crocheting, and a special love of Christmas. She will be dearly missed by all who knew her.

Linda is survived by her daughter, Lisa Keddy, Truro; and her brother, Gerald (Mary Ann) Keddy of Berwick. In addition to her parents, she was predeceased by her daughters, Maria and Michelle; and sister, Jolene.

A private cremation has taken place and a graveside service will be announced in the spring. Donations in memory can be made to the Kings County SPCA or the animal rescue charity of one’s choice. A special thanks to the caring staff at the Meadows, Mountain Lea Lodge and the White Family Funeral Home. On-line condolences and inquiries may be directed to www.whitefamilyfuneralhome.com.