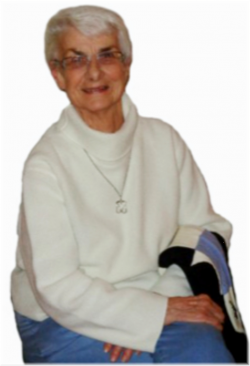 She was born at home on October 18, 1926, on the Cobequid Road, Windsor Junction, NS. She was a daughter of the late Garland George West and Amelia Jane West (nee Woodland).

Mary grew up and attended school in Windsor Junction before marrying Edward A.W. Kemp of Halifax.

Mary lived in Bedford (1943-1966), Fairview (1966-1968), Kentville (1968- until the time of her death) where she worked at various businesses. She graduated in the early 1970’s from Mack Business College and attended courses at Kingstec, Kentville. Her position as guide at Prescott House was her favourite job of all. Her love of talking to and helping people led her to be involved in organizations such as Welcome Wagon (where she won various awards). She volunteered with the Canadian Red Cross and the Kosovo refugees. She was also involved with helping out during the Swiss Air crash near Peggy’s Cove. She was a member of Hobby Crafters, Kings Historical Society, and wrote and published stories of her youth with local Grannies for Africa. She was a member of the Seniors’ Bowling League in New Minas. She was also involved in the Sackville Trails Association that worked on the creation of the First Lake Trails; the same property that her parents once owned. Mary liked to travel and once travelled around the world to Australia, New Zealand, Fiji, Iceland and Pearl Harbour, Hawaii, with her niece, Nancy West. Mary was dedicated to her long-time friends and kept in touch throughout her life, with Dorothy and Ken Blenkhorn, Dave and Lucy Furlotte, and Kay Sharpe.

Cremation has taken place. The funeral service will be held at a later date. In lieu of flowers, donations may be made to the Alzheimer Society of Nova Scotia or the Canadian Red Cross. Funeral arrangements have been entrusted to the White Family Funeral Home and Cremation Services, Kentville, NS. Online condolences and inquiries may be directed to www.whitefamilyfuneralhome.com.

>Click here to View Condolences
Service Location
The funeral service will be held at a later date.
Visitation
There will be no visitation, by request.
Requested Charity
Alzheimer Society of Nova Scotia or Canadian Red Cross