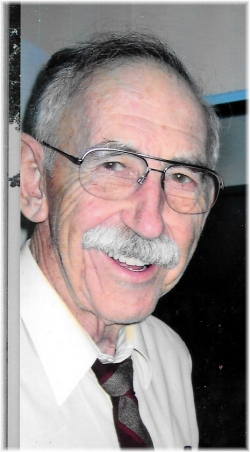 David Crowe was the quintessential Valley boy - industrious, resourceful to a fault, friendly, quiet, and respectful of others. He was raised in Berwick, lived and worked in Kentville, and later resided in Wolfville for nearly half a century. David has passed away peacefully, in Greenwich, at age 99.

Born in a Port Williams birthing house, descended from multi-generational Nova Scotians, David was raised on his parents’ farm in North Berwick. He joined the British Navy during the Second World War, where he trained to be a pilot. Upon his return to Canada, he enrolled at the Agricultural College (A.C.) in Truro, and then completed his B.Sc. and M.Sc. at McGill University in Montreal. While in Montreal he met and married his wife, Joan. David and Joan returned to Nova Scotia when their studies were complete, where he accepted employment at the Kentville Research Station. Following the birth of their two children, David and Joan moved to Ithaca, New York, where David earned his Ph.D. from Cornell University. The newly minted Dr. Crowe spent the next 40 years enjoying a robust career at the Kentville Research Station in the tree fruits section. His research focused on light energy utilization, rootstock selection, orchard layout, tree training, and experimentation with new varieties of apples and pears suited to the climate of Atlantic Canada. A member of the Agricultural Society of Canada, his work was recognized by the New York Academy of Sciences and published as far away as Czechoslovakia. Two of his legacies are the Kestral apple, and the standardized apple bins that are still in use today. In his "spare time", David operated a farm and managed orchards for others, where he practiced many of the Station’s innovations. Some of those years were spent in partnership with long-time friends Keith and Charlotte Boates. While David and Joan’s children were at home, the whole family helped on the farm, but they also spent many hours together on the ski slopes. International travel became a much-enjoyed vocation. Special friends Carl and Doris Gourley often joined David and Joan on their many travels. David’s natural curiosity, love of learning and frugality led to a life of perpetual puttering, fixing and improving. His extensive gardens at home and at the cottage were a particular source of pride in his retirement years. David was an early volunteer at the United Church of St. Paul and St. Stephen in Kentville, and he later served on the Park & Shade Tree Committee for the Town of Wolfville. He held various executive positions with the Nova Scotia Fruit Growers Association, and he sat on the boards of the VON, Eastern Kings Memorial Hospital and the Valley Regional Hospital. David’s benevolent nature led him to establish the A. David Crowe Family Foundation for charitable giving, a portion of which focuses on the Dr. A. David Crowe Graduate Scholarship, the "largest and most prestigious Ph.D. scholarship at the Faculty of Agriculture", for the encouragement of higher education in the field of agriculture. Awarded annually to a student at Dalhousie’s Agricultural Campus in Truro, his scholarship has, to date, funded the school’s very first Ph.D. student, as well as sponsoring other research in the field of partnership links between medicine and agriculture. David enjoyed a friendly, competitive, game of bridge and enjoyed telling the story of the games when he first met Joan at college. He was a long-time member of the Wolfville Curling Club where cribbage was often the second game of the day. He was always active, always fit, and at the age of 95 skipped the Wolfville Curling Club to victory in the Maritime invitational McLellan Cup.

David is survived by sister-in-law, Phyllis McKibbin; son, David "Vance" (Michal) Crowe; daughter, Phyllis (Ron Best) Crowe; grandchildren, Stephanie (John) Peskett, Kerry (Amanda) Coolen, Colleen (Drew) Carruthers; great-grandchildren Tyler and Mitchell Peskett, Kae and Violet Coolen, Cameron David and Aria Carruthers; as well as many important nieces and nephews, whose exploits and updates he followed closely. Many thanks to the caring staff at Shannex Blomidon Court in Greenwich, for their compassion and the respect shown to David in the last months of his life.

In keeping with David’s wishes, his body has been donated to medical research, so there will be no interment at this time. A donation to the A. David Crowe Scholarship is an option (giving.dal.ca/crowescholarship), but any charity of your choice is very likely to be one that David himself supported. A celebration of life, followed by a reception, will be held in the White Family Funeral Home, Kentville, on Friday, February 10, 2023 at 2:00 p.m. For those unable to attend, a livestream of the service will be available at that time. Funeral arrangements have been entrusted to the White Family Funeral Home and Cremation Services, Kentville.