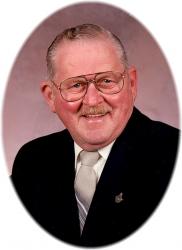 Please note: Due to the inclement weather, the funeral service for Mr. Andersen has been rescheduled to 11:00 a.m. Monday, November 24, 2008 in the Kentville Baptist Church.


John Axel Andersen … 75, of New Minas, passed away Wednesday, November 19, 2008 in the VG Site, QEII, Halifax. Born in Windsor on September 9, 1933, he was a son of the late Hans and Clara Andersen. He is survived by his wife, Joy (Boudreau) Andersen; a sister, Ellen (Karl) Pedersen, Mississauga, Ontario; three children, Diane Schofield, New Minas; Alan (Sandra) Andersen, North Alton and Richard “Jim” (Krista) Andersen, Kentville; stepsons, David and Adam Wilson, Toronto; seven grandchildren and six great grandchildren. He was predeceased by his first wife, Grace Marie (Stark) Andersen. During his life, he followed several careers. At the age of 13, he signed on a merchant ship which sailed the east coast. Following a short period at sea, he returned to school to upgrade his education. In 1952, he joined the RCAF and served for a period of eight years. He then became involved in several occupations and in 1963 accepted a position with the South Shore Credit Bureau in Bridgewater. The following year he opened and managed the South Shore Credit Bureau in Yarmouth and in 1967 was promoted as Manager of the Credit Bureau of Kentville Ltd. In 1986 he accepted the position of Western Zone Controller of the Emergency Measures Organization where he remained until his retirement in 1998. He was a member of the Kentville Baptist Church, as well as a number of other organizations. He was an avid amateur radio operator, and one of the founding members of the Kings County Amateur Club. He served a term as President of the Associated Credit Bureaus of the Atlantic Provinces. He was a member of Scotia Masonic Lodge, served as master of Horton Lodge No. 132, High Priest of Cornwallis Chapter of Royal Arch Masons, Presiding Preceptor of Mount Zion Preceptory and was a member of Adronirum Council. He had held Life Memberships in many of these organizations. In his spare time, he formed a company, DARA Services Ltd. which was quite involved in developing subdivisions, operating and repairing heavy equipment and built many houses and cottages in the area. John also formerly owned and operated the Annapolis River Campground. He was also an avid sportsman and enjoyed hunting, fishing, golf and curling. He spent most of his later years building models of ships and aircraft and spent many hours in his shop wood crafting. Visitation will be held from 6-8 p.m. Friday, November 21, 2008 in the White Family Funeral Home, Kentville. The funeral service, followed by a reception, will be held at 1:00 p.m. Saturday, November 22, 2008 in the Kentville Baptist Church, Reverend John McNally officiating. Burial will take place in the Elm Grove Cemetery, Steam Mill, Kings County. Family flowers only, by request. Donations in memory may be made to the charity of your choice. Funeral arrangements have been entrusted to the White Family Funeral Home, Kentville.