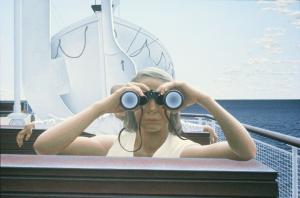 COLVILLE, Hon. David Alexander, PC, CC, ONS - Alex Colville, the renowned realist painter, died peacefully at his home in Wolfville, N.S., on July 16, 2013. He was 92 and had been in failing health, especially since the death last December of his wife, Rhoda, his partner and muse for more than 70 years of marriage. Born in Toronto on August 24, 1920, he was the son of David Harrower Colville, a Scottish-born steel plant superintendent, and Florence Gault Colville, a milliner and for many years proprietor of Irene's, a women's clothing store in Amherst, N.S. After moving to Amherst with his family in 1929, Colville studied fine art at Mount Allison University in Sackville, N.B., where in 1938 he met and fell in love with Rhoda Wright, a classmate. They married in 1942. After his service as a war artist he and Rhoda returned to Sackville, where he taught art and art history at Mount Allison from 1946 until 1963, when he decided to devote himself to painting. In 1972 the couple returned to Wolfville and Rhoda's childhood home, where for many years he had maintained a third-floor studio during summer stays at the Wright family cottage nearby. It was there that a cottage scene inspired the 1953 painting "Man on Verandah", which set a record for a work by a living Canadian artist when it sold for $1.29 million in 2010. Colville was named an Officer of the Order of Canada in 1967 and became a Companion of the Order of Canada in 1982. He served on the Canada Council and was chancellor of Acadia University in Wolfville from 1981 to 1991. He is survived by two sons, Graham (Wendy) and Charles (Cathy); a daughter, Ann (John) Kitz; grandchildren, Ann (Louis) Colville Somma, Elizabeth Colville, Claire (Sam Parker) Colville, Hannah (David Matthias) Colville and Nathan (Ashley Connors) Colville and Alex (Laura Trigg) Kitz, Robert Kitz and Hilary Kitz; great-grandchildren Leo Somma, Benjamin Colville and Hannah Kitz. His second son, John, died in 2012. A funeral service will take place at Acadia University's Manning Memorial Chapel at 10:30 a.m. on Wednesday, July 24, 2013 followed by private burial. The family wish to express heartfelt thanks to his longtime physician and family friend Wayne Phillips, caregivers Donna Gilbert, Rose Ingram, Dot Hancock, Marilyn Cameron, and the VON nurses. In lieu of flowers, donations may be made to the Valley Hospice Foundation. Funeral arrangements have been entrusted to the White Family Funeral Home and Cremation Services, Kentville.