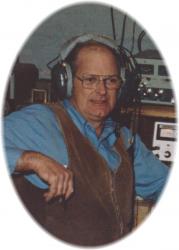 Lewis Allen Thorpe - 81, of New Minas, passed away Tuesday, October 29, 2013 in the Valley Regional Hospital, Kentville.  Born in Centreville, Kings County, he was a son of the late George and Dorothy (Sanderson) Thorpe. He was a loving husband, father and grandfather. Until retirement he worked as a poultry farmer for 39 years. He had also been custodian of St. James Anglican Church, Kentville for nine years and was a ham radio operator for 64 years. He enjoyed playing and listening to various types of music. He is survived by his wife, the former Marie Martha O’Hara; three daughters, Virginia (Vance) Millett, Kentville; Suzanna, Somerset; Rosemary (Ralph Harroun) Simpson, Coldbrook; two sons, Stephen (Joanne), Black Rock; Lewis Jr. (Teena), Berwick; one sister, Doreen MacDougall, New Minas; one brother, Bernard, Lockhartville; 17 grandchildren, several great grandchildren, nieces and nephews. He was predeceased by a daughter, Carolyn and a sister, Grace. Visitation will be held from 6-8 p.m. Friday, November 1, 2013 in the White Family Funeral Home, Kentville, where the funeral service, followed by a reception, will be held at 2:00 p.m. Saturday, November 2, 2013. Burial will take place in the Berwick Cemetery. Donations in memory may be made to the charity of your choice. Funeral arrangements have been entrusted to the White Family Funeral Home and Cremation Services, Kentville.