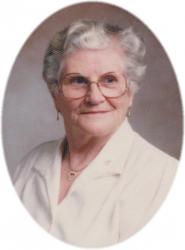 Christina "Tina" de Geus, formerly of New Minas, passed away Thursday, January 16, 2014 in the Wolfville Nursing Home at the age of 97. Born in De Beemster, The Netherlands, she was a daughter of Chris and Eefje (Dekker) Hartog. Tina, her husband Klaas and their three children immigrated to Canada in 1957 and settled in Nova Scotia. She and Klaas made a new life for the family in Canada, including setting up and running a successful flower shop and landscaping business in Bridgetown. She is survived by son, Bram (Barbara), Kentville; daughters, Louise O’Donovan (Gerry), Dublin, Ireland; and Tineke (Paul Collier), Toronto; six grandchildren and five great-grandchildren. She was predeceased by Klaas in 1977 and by her sister, Eva Meyer in Holland. While Tina enjoyed being a homemaker, she took great pleasure from her work as a floral designer. Over the years, she gave many demonstrations on all aspects of floral designing. This lead to a new career teaching floral design in the continuing education department of the Nova Scotia Agricultural College where her courses were always very popular. Besides being an avid bridge player, Tina was an active member of the New Minas United Church of which she was a charter member. She sang with great joy in the choir and also looked after the flowers for the Sunday services. There will be no visitation. The funeral will be held on Wednesday, January 22, 2014 at 2:00 p.m., at Orchard Valley United Church, 130 Cornwallis Avenue, New Minas. Burial will take place in the Bible Hill Cemetery at a later date. Donations to a charity of your choice would be welcome. The family would like to express its sincere thanks to the staff of the Wolfville Nursing Home who have, over the years, given our mother such wonderful care. Funeral arrangements have been entrusted to the White Family Funeral Home and Cremation Services, Kentville.