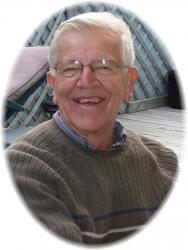 Dean Ellis Hatt - 79, of New Minas, Kings County, passed away in the Valley Regional Hospital, Kentville on February 9, 2014. Born on March 10, 1934 in Wolfville, he was a son of the late Ellis and Kathleen (Hennigar) Hatt. Dean was raised in New Minas, attended Highbury School in the early years and attended Kings County Academy in Kentville from Grade six to 11. He moved to Liverpool in 1955 to manage a Sears store for 10 years. Dean spent 10 years with the Prudential Insurance Company of America before going with Standard Life. In 1956 he married Marie Dexter of Brooklyn, Queens County, they returned to New Minas in 1970. He was a member of the New Minas Lions Club for 30 years having served as President and Treasurer. Until retirement in 1999 Dean travelled Atlantic Canada as a self-employed Manufacturers Agent. Dean was a member of the New Minas United Church where he served on various committees. He also served as a commissioner of the Village of New Minas for three terms. He is survived by his wife of 57 years, the former Marie Dexter; two sons, Larry (Holly), Kingston; Darrell, North Alton; two brothers, Wayne (Ruth), Shubenacadie; Dale (Millie), Port Hawkesbury; two granddaughters, Amanda and Kristina; many nieces, nephews and extended family members. In addition to his parents, he was predeceased by a brother Curtis. Visitation will be held from 6-8 p.m. Wednesday, February 12, 2014 in the White Family Funeral Home, Kentville, where the funeral service followed by a reception will be held at 11:00 a.m. Thursday, February 13, 2014, Doctor Bob Wilson officiating. Burial will take place at a later date in the Scotts Bay Cemetery. Donations in memory may be made to the Valley Hospice Foundation or the Children's Wish Foundation.  Funeral arrangements have been entrusted to the White Family Funeral Home and Cremation Services, Kentville.