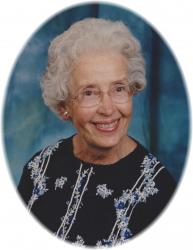 Emma Louise "Lou" Crossan - 92, of Wolfville, passed away Monday, June 2, 2014 in the home of her caregiver, Cathy Stewart. Born on March 7, 1922, Louise was the daughter of the late Frederick and Ann (MacKinnon) Nash of Rockland, Berwick. She was predeceased by her husband, James "Jim" Forbes Crossan; her second son, Andrew Boyd Crossan and Andrew’s wife, Faye Lyons Crossan. She is survived by her step-daughter, Julia Copeland of Oshawa, Ontario; her son, Frederick Crossan; daughters, Catherine Whitney and Ann Crossan; son-in-law, David Whitney; grandchildren, Rob Crossan, Barbara Parker, Tess Whitney and Jenna Whitney; one great grandson, Aidan Parker and a great granddaughter, Rose Louise Whitney-Milner, as well as cousins, Mary Walsh and family, Berwick; Jean Caldwell and family, Wolfville area; and Marg Wieche and family. After graduation from Acadia University, Louise worked as a stenographer at Camp Aldershot during WWll. She later volunteered as a receptionist in a hearing and speech clinic, during her years as a wife and mother in Kentville. She was an avid participant in community activities, church and university choirs and Meals-on-Wheels, and a frequent performer in Jack Sheriff’s Summer Playhouse Productions. Lou’s natural grace, strength of character and gentle spirit made her a popular and respected member of the community. She was much loved by all who knew her. The family wishes to extend thanks to residents of Tideways, Valley Regional Hospital staff and Cathy Stewart of Wolfville, as well as all the Annapolis Valley people who were a supportive influence over the years to the Crossan family. Cremation has taken place. There will be no visitation by request. A private family interment will take place in the Elm Grove Cemetery, Steam Mill. Family flowers only. Donations in memory may be made to the Valley Regional Hospital Foundation. A memorial service, followed by a reception, will be held at 2:00 p.m. Friday, July 4, 2014 in the White Family Funeral Home, Kentville.