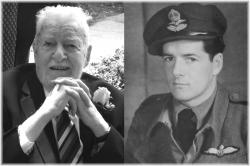 Bill was born in St. Catharines, Ontario in 1921 the son of John Frederick and Edith (White) Hockey. When he was two he moved to Kentville, Nova Scotia, and graduated from Kings County Academy. He only left the town to serve his country in the Second World War as a pilot.  Prior to shipping out he eloped with his childhood sweetheart Una Wood, marrying in Moncton, New Brunswick.  He called her Freckles, and painted that name onto his Spitfire. Following his tour in North Africa and Italy he returned to England and spent time training Free French pilots, an activity he was quite proud of. He finished the war as a flying officer returning home to resume his life. He said, Every day I’ve seen since the war I consider a bonus.

After the war he started out as a mill owner but following its loss in a fire he had several jobs with an oil company, managed a local clothing store and subsequently became a campground owner with his wife, Una. They bought land on the outskirts of Kentville and built a campground there named Camelot Park, after the legends of King Arthur that they loved. He loved birds and animals, fishing and cross-country skiing and was almost always in shorts, even when everyone else was bundled up. With his whole family he was heavily involved in scouting, was very active with the Rotary Club of Kentville, serving as president and becoming an honorary life member of the club. He was also active with the Campground Owners Association.

He lost his middle son, Bobby, at the age of 13. His oldest son, Bill Jr. graduated in architecture and focused his career on building conservation and is well known in his field. He and his wife, Marjorie, (Jordan) gave him three granddaughters. Bill’s youngest son, David, a musician and videographer has had productions shown on Discovery Channel and History Channel as well as the Smithsonian Institute. He and his first wife, Sharon (Reese) gave Bill two granddaughters.

Grampy loved his granddaughters very much and encouraged and supported their education.  He wanted them to do better than he did and to be the best that they could be. Jennifer became a lawyer, Jillian a computer programmer, and Janet an IT technician and auditor. Sarah graduated in graphic design and teaching, and Katrina a nurse. He was also blessed with four great-grandsons, Emery and Everett, (Jillian) and Jake and Ryker, (Sarah).  Family was hugely important to Bill and he always wanted family around, delighted in them, and family gatherings at Camelot in the old lodge room were a frequent event.

Bill was a member of the Royal Canadian Legion. In later years he shared his stories with family and a few authors and travelled around the world to see old comrades and attend war pilot reunions.

Bill passed away peacefully at home on Saturday, August 2, 2014. In addition to the family members listed above he is survived by his sister, Marjorie Coskery in Mississauga, Ontario as well as nieces and nephews. He was predeceased by his son, Bobby; his wife, Una and his brother, Eric. Cremation has taken place and a celebration of his life will be held on Friday, August 8, 2014 at 3:00 pm at the White Family Funeral Home, Kentville. The family would like to thank the caregivers and Veterans Affairs who enabled Bill to remain at home following his stroke in June, 2010. In lieu of flowers, donations can be made to the charity of your choice. On-Line inquiries may be directed to www.whitefamuilyfuneralhome.com

See the "SPITFIRE II the Canadians" by Robert Bracken for Bill's story about his service as a Spitfire pilot for the RCAF during the Second World War.