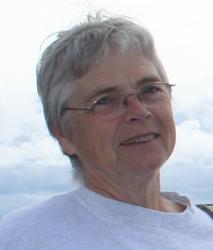 Williamina Wishart Adams (McLaren) Haworth - Wilma was born in St. Andrews, Scotland, in 1944, to Jock (John Renton Young) and Maggie (Margaret Neil Wishart (Robertson) McLaren. She was educated in St. Andrews, both at school and university, before heading to Edinburgh University. Her degree in Economics and Geography with supporting French and German gave her an eclectic view of the world, which she combined with excellence in athletics and sport. Her prowess in playing field hockey for both universities earned her a place on Scotland's international squad. Her academic qualifications gained her employment with the Ministry of Agriculture and Fisheries carrying out soil evaluations in England and Wales. She was based in Cambridge, where she met her future husband, Richard. Upon completion of his PhD, Richard gained employment with the Canadian Federal Government at Bedford Institute of Oceanography and he emigrated to Canada in 1968. The Atlantic did not separate them for long because they married in St. Andrews in 1969 and Wilma came to Canada. In the early 70s, with help from many friends, they built their cedar log house in Lake Echo where she gave birth to and nurtured their two sons, Neil and Mark.  She became heavily involved with St. David's United Church in Lake Echo, particularly its choir and UCW group. After 14 happy years in Nova Scotia, Richard's profession took them to the UK in 1983, an anticipated 3-5 year posting that lasted for 7 years. The choral interests of the family blossomed during that time while Neil and Mark were boy sopranos with Nottingham Boys Choir (NBC). The Clifton Singers, a small choral group of former members of NBC and their parents, continued to exercise her vocal talents in worship services of all denominations and at various cathedrals throughout the UK. In 1990, they came home to Canada, to Ottawa. As the boys became adults, and her family oversight reduced, Wilma searched for other challenges. She sang with Ottawa Choral Society at the National Arts Centre and other venues in Ottawa, on two European tours and at Cathedral of St. John the Divine in New York. Extending her professional qualifications she started her work in tax management. This work flourished when they returned to Nova Scotia in 2003 upon Richard's retirement, to Wolfville, the town that she had fallen in love with many years before. Wilma continued her involvement with the United Church of Canada through St. Andrew's in Wolfville, as a leader in the choir and as Treasurer. She also sang with Kings Chorale and other groups, including a recording made in support of the Covenanter Church in Grand Pré. Wilma was diagnosed with cancer in February, 2014 and complications dogged her fight against the disease. The family would like to thank the doctors, nurses and staff of Valley Regional Hospital, Kentville and the VON, for their tender care throughout her ordeal. She is survived by her husband of 45 years, Richard, her sons Neil (Jill) and Mark (Trish), grandsons Duncan and Liam, brother James (Patricia), nephews Daniel (Katie) and Euan (Julie) and many cousins and their families in Scotland. Cremation has already taken place and a memorial service will be held at the White Family Funeral Home in Kentville at 3:00 p.m. on Sunday, September 14, 2014, Reverend Robyn Brown Hewitt officiating. In lieu of flowers, Wilma would have appreciated donations to the Canadian Diabetes Association or the Canadian Cancer Society. Funeral arrangements have been entrusted to the White Family Funeral Home and Cremation Services, Kentville.