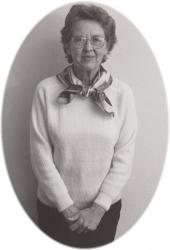 Doreen Joy Tillotson - Age 91, passed away at the Wolfville Nursing Home, 14 September 2014. Born in Meyronne, Saskatchewan, on May 27, 1923, she was the daughter of Gustav and Joy (McCaslin) Bolstad. During her life, she experienced the dust storms of the 1930s, the dislocations of the Second World War, and the best of the affluent, family-centred 1950s and progressive 1960s. She was forever grateful to her parents for all that they did for her. An excellent student, she graduated with a B.A. from Brandon College and a professional diploma in social work from the McGill School of Social Work. She married Glen Tillotson in 1948, and with him raised three children during a long and happy marriage. She was a social worker in the late 1940s, and continued after marrying to be involved as a volunteer in housing issues, including the creation of the Tideways seniors’ housing. Throughout her life, she was an enthusiastic reader and loved to hear about ideas and social issues. She worried that Canada was becoming a less caring country, and was a staunch supporter of many good causes. She was fortunate to have had many good friends and neighbours on Westwood Avenue and beyond. An active member of Wolfville’s St. Andrew’s United Church congregation, she found in the church a community with whom she could share the big projects of social justice and caring for others. Her family is grateful for the kind and conscientious support given her by her caregiver, Wendy Duboy, in the latter years of her life. Besides her parents, she was pre-deceased by her husband Glen, daughter Joy, and brothers Wesley and Mervyn. She is survived by son Jim, daughter-in-law Jane Cayford, daughter Shirley, granddaughters Sally, Sarah, and Christina Blenkhorn, great-grandson Joe Bavis, nephews Bill, Jim, John Bolstad, and nieces Jane Bolstad, Kristin Bolstad, and Barbara Knill. In lieu of flowers, donations in Doreen’s name may be made to Habitat for Humanity. Cremation has taken place. There will be no visitation, by request. A memorial service, followed by a reception will be held at 4 p.m. Wednesday, September 17, 2014 in the White Family Funeral Home, Kentville, Reverend Annika Sangster officiating. Funeral arrangements have been entrusted to the White Family Funeral Home and Cremation Services, Kentville.