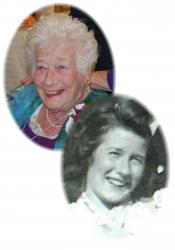 We, the five children of Florence Louise (Fletcher) Ogden, 95, are deeply saddened to announce the death of our mother. Born September 28th, 1919, to Everett Campbell Fletcher and Margaret-Jane (Lightbody) Fletcher on the Fletcher family farm in Glenholme, Nova Scotia, our mother lead a dynamic, productive life that was rich and full. The youngest of eleven, she was the last surviving member of her immediate family. An advocate of life-long learning and travel, her early education began in the little Glenholme School, followed by the Colchester County Academy in Truro, and then Albert College in Belleville, Ontario. Being a motivated academic student, our mother achieved outstanding success and academic recognition at all levels of her education. Following seven years of employment in Ontario, mother returned to Nova Scotia married Thomas Reginald Ogden, and both were employed as Civil Servants at H.M.C. Dockyard, Halifax, until the end of World War II when they moved to Truro. Our mother and father and their four young children moved from Truro to Bridgewater then to Wolfville, where they added another little Ogden to the family unit. Mother always taught that in whatever community you live, you must give-back through volunteering, and she was exemplary. Mother organized and was Superintendent of the Junior Sunday School for St. Andrew’s United Church, Wolfville, which was the family’s church for the fifty plus years she was a resident of Wolfville. The Wolfville Girl Guide program greatly benefitted from mother’s volunteer leadership; and organizing and leading not only the Wolfville Troop, she ensured her Guides got to Hardwood Lake Guide Camp by training and becoming Camp Commandant, then Camp  Supervisor, and Camp Commissioner. Our mother was an avid Bridge player, gardener, and a strong and active member of many service clubs including, Lionettes, Secretary-Treasurer for the Kings County Retired Teachers’ Association, Secretary to Minas 50 Plus Club, church organizations and committees, and she served as a collector for many charities including 29 years with CNIB. Mother was the Government Representative on the Board of Trustees of Eastern Kings Memorial Hospital, Chairperson for the Social Assistance Appeal Board for Kings County, and a Census Commissioner. She was an ardent supporter for the Progressive Conservative party, having been secretary of the Kings County organization for ten years, President of the Women’s Association, and recipient of the MacDonald-Cartier award presented in Toronto, by Prime Minister Mulroney. Not only did mother advocate volunteerism, but we five grew knowing one’s education never ended. Here, too, our mother practiced what she taught; we, her family, were so very proud when she walked across the stage at Convocation Hall, Acadia University, (Alma Mater to several of her children and grandchildren) receiving her B.A. and B.Ed. Mother then taught at Horton District High School for eighteen years where she became a full and welcomed contributor to the staff and student activities, including Newspaper Advisor, Coordinator for the Allied Youth program, Band chaperone, and many other student-centered activities. Our mother was predeceased by her parents and all ten of her siblings, her former husband, and infant granddaughter – Heather Anne Ogden. Mother dearly loved her children, grandchildren, and six great grandchildren and kept her wonderful vitality and joy for life long into her eighties much to the pleasure of her three generations of offspring. She is survived by Janet Ogdencalder (Laredo, Texas) and her two sons and families, T. Rod Ogden (Lorneville) and wife, Erie, and their three sons and families, Margaret-Jane Ogden Christie (Bridgetown) and husband, Peter, and her four children and families, Loretta Ogden-Froud (Bristol, England) and husband, Martin, and their two children, and Craig (Iroquois Falls, Ont.) and wife, Julia, and their three children. Our mother is survived by many cousins, and nieces and nephews. A special thank you is given to the staff at Orchard View Apartments, Berwick, for their devotion and kindness, and to the Doctors and Nursing staff of Medical Unit B in Valley Regional Hospital. The Funeral Service shall be held on Saturday, October 18th at 2:00 p.m. at The Erskine United Church, Glenholme, with Rev. Carol Gillard officiating assisted by Rev. Lester Settle.  Soloist is Nancy Denton-Peck of Wolfville.  In lieu of flowers, donations may be made to the Erskine United Church, Glenholme. Being the devoted and wonderful mother she was, she will be greatly missed by us, her five children, grandchildren, and her many friends and relatives.  "…and her children shall rise up and call her blessed…" Proverbs 31:28. Arrangements have been entrusted to the White Family Funeral Home and Cremation Services, Kentville.