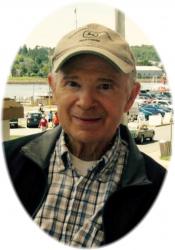 Due to the inclement weather forecast, the funeral service has been re-scheduled and will be held at 11:30 a.m. Wednesday, January 28, 2015

John Robert "Bob" Neary - 76, of Kentville, passed away peacefully on Friday, January 23, 2015 in the QEII Health Sciences Centre, Halifax. Bob graduated from Acadia University in 1968 with a Bachelor of Science, and later, a Bachelor of Education. He spent the bulk of his career teaching Industrial Arts at Central Kings Rural High School. His own interest in mechanics helped him relate with so many of his students over the years, with class projects aimed at building hovercrafts and windmills, or repairing cars / snowmobiles / motorcycles owned by the students themselves. In Bob’s retirement years, he worked on his own projects and was awarded many patents for his advancements, working closely with his brother, Doug. Bob learned to play the drums in the KCA bugle band, and as a member of the 507 Air Cadets Squadron pipe band, was one of a hundred pipers and drummers selected to play at the opening of the Canso Causeway. His love of music lasted  for the rest of his life, playing with The Mac Dodge Band, The Fugitives, and others. Born in Kentville, he was a son of the late Murray and Olivia (Kinsman) Neary. He is survived by two sons, Mark (Tanya), Mt. Uniacke; Scott (Rhonda), Calgary; two grandchildren, Madeline and Benjamin; a sister, Shirley Anne (John) Vereshack, Toronto; a brother, Douglas (Elizabeth), New Minas; a sister-in-law, Jeannette, Kentville; nieces and nephews. He was predeceased by his wife, Janet; a brother, Charles. Cremation has taken place. There will be no visitation, by request. The funeral service, followed by a reception, will be held at 11:30 a.m. Wednesday, January 28, 2015 in the Canard Community Church, Upper Canard, Kings County, Reverend Doctor Bob Wallace officiating. A private family interment will take place in the Starr's Point Cemetery, Kings County. Bob was a family man, who was very close with his two boys and his grandchildren. He was involved in his community and his church. He will be deeply missed. The family would like to thank the many doctors, nurses, CTA’s and "bodyguards" at the QEII’s 6B Nephrology unit responsible for the exceptional care provided. Family flowers only, by request. Donations in memory may be made to The Kidney Foundation of Canada. Funeral arrangements have been entrusted to the White Family Funeral Home and Cremation Services, Kentville. On-line inquires may be directed to www.whitefamilyfuneralhome.com.