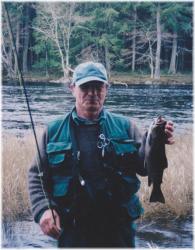 It is with broken hearts that the family of Michael Brylinsky announces his passing during the early morning hours of Sunday, May 24.  Michael was surrounded by the love of family and friends during his entire six-month struggle with pancreatic cancer, and he died while his devoted and loving wife, Darlene, slept next to him, and family and friends encircled them with support and care.

Michael was born and raised in Bayonne, New Jersey, where he attained a unique perspective on life, as well as extra special knowledge and life-skills from his "Soprano-like" Uncle PeeWee.  Michael graduated from Syracuse University with a Bachelor’s degree in Zoology, and continued his studies at the Institute of Ecology, University of Georgia, where he received a Ph.D in Ecology in 1971.  Michael moved to Nova Scotia that year to accept a post-doctoral fellowship with Dalhousie University and while there received a Killam Research Fellowship.

A belief "that nature will provide" found Michael as an experimental farmer for part of his life, both on land and at sea; and although the toil was hard, he gained knowledge, pleasure and satisfaction from his labors and his harvests.  Occasionally he was even known to sell mackerel door-to-door.  Michael would make it work--Michael could make anything work.

Eventually Michael moved to Wolfville and reestablished his academic career at Acadia University as a lecturer in the Department of Biology and in 1985 as a Research Associate at the Acadia Centre for Estuarine Research, a position he held until his death.  During his career Michael mentored many undergraduate and graduate students, wrote or contributed to over ninety publications, and was instrumental in the development and implementation of a vast array of research projects and volunteer programs, all to help improve the understanding and conservation of local rivers and waterways throughout the Maritime Provinces. Michael also volunteered on various local and provincial environmental projects and committees, receiving an Environmental Award from the Province of Nova Scotia in 1998, and in 2001 the Gulf of Maine Visionary Award from the Gulf of Maine Council on the Marine Environment.

Michael was well-suited to the wilderness of the land and to the beauty and strength of our rivers and waterways, and would very often head out with his fishing and camping gear, and be away for days, happy and connected to nature.  He found intense pleasure in the art of fly tying, creating the perfect mimic of an insect that would hopefully "trick that fish" onto his line.  He, together with his great friend, the late Fred Payne, enjoyed many debates and fishing expeditions with the intent to outwit the fish.  Afterward, Michael was always happy to return, with his catch, to his truly-loved wife, Darlene, and their "nature reserve" home in Sheffield Mills.

Michael’s passion for education, conservation, and sustainability, were the key components of his character, and he lived his life with integrity.  He spoke both academically and plainly, and had high expectations of himself and of those he dealt with.  He believed in furthering the values of self-teaching, environmental stewardship, and natural living.  He abhorred greed, in all its forms; yet he loved, and was loved.

In addition to his wife, Darlene Feener, Michael is survived by his mother, Stella (Buonaiuto) Brylinsky (New Jersey); his daughter, Jocelyn May and her children, Katelyn and Sophie May (Halifax); his brother, Raymond Brylinsky and his wife, Ursula (New Jersey); his niece, Kathryn Brylinsky (New York); his nephew, Nicholas Brylinsky (Vermont); his nephew, Nicholas Mahoney and his partner, Anya Weiler and their children, Amiah and Adelynn (Coldbrook); his mother-in-law, Leona Feener (New Minas); his sister-in-law, Kelli Mahoney (New Minas); and his brother-in-law, Ernest Feener (Canning).  Michael was predeceased by his father, Murray Brylinsky and his father-in-law, James Feener.

Cremation has taken place.  There will be no visitation by request.  A memorial service for Michael will be held in the late summer. Arrangements have been entrusted to the White Family Funeral Home and Cremation Services, Kentville. On-line condolences and inquiries may be directed to www.whitefamilyfuneralhome.com.

Service Location
A memorial service for Michael will be held in the late summer
Visitation Location
There will be no visitation, by request