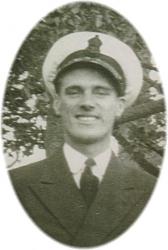 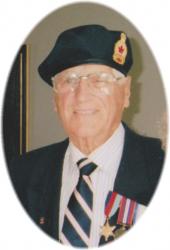 Rockwell Fletcher "Rocky" Hazel passed away peacefully at the Veterans' Unit at Soldiers' Memorial Hospital in Middleton, at the age of 97. He was born on September 28, 1917 in Scotch Village, Hants Co., N.S. His parents were Dora (Blenkhorn) and Warren Hazel. Rocky was predeceased by his wife, Florence (Jodrey) on January 5, 2015; sisters, Mildred, Rose, Florence and Mabel; brothers, Harold, Reg, Roy, Robert, Cliff and Glendon. He is survived by one sister, Vivienne (Ron) Maynard; sisters-in-law, Hilda Hazel and Laura "Honey" Barkhouse. He is also survived by daughters, Anne MacKinnon and Irene Hazell; son, Frank Hazel (Gail); son-in-law, Dr. Brian MacKinnon; seven grandchildren, Scott, Alex and Jesse MacKinnon (Jean Cameron), Jan and Sarah Sarsfield (Chad Bruce and daughter, Maxine), Matt Hazel (Keeli Smith) and Emily (Mark) Leach; three great ­grandchildren, Bradley, Lauren and William Leach; as well as many nephews, nieces and cousins. Rocky took great pride in his children and grandchildren and enormous delight in his great­ grandchildren. He was always supportive and generous to everyone - family, friends and acquaintances. Rocky joined the Merchant Navy in 1940 and made 14 North Atlantic crossings in 1941. He subsequently joined the Navy in 1942 and went to France on D-Day, June 6, 1944. After the war he built, owned and operated movie theatres in Tatamagouche and  Port Hawkesbury. He later moved to Kentville and established the Valley Drive-In in Cambridge. Rocky was a resident of Kentville for 47 years and a member of the Glooscap Curling Club and the Ken-Wo Golf and Country Club for many years. He enjoyed golf trips to Ireland and Scotland and the Southern U.S., as well as many fishing trips to Labrador, Northwest Territories and the Miramichi with family and friends. Over the years, Rocky worked as a volunteer for various clubs and charities and participated in the Big Brothers and Big Sisters program where he was named Big Brother of the year in 1985. In 1965, he was a founding director of the Keltic Savings Corporation and was made an Honorary Director in 1990. He had a life-long interest in politics and ran for provincial office in 1960 under Robert Stanfield, for whom he had great respect. Rocky was a singer all his life and sang tenor in various choirs including the Barbershoppers of which he was a life member. In the 60's he was a participant in the musical theatre productions of Jack Sheriff at Acadia University, singing in Brigadoon, Carousel, and My Fair Lady. At the age of 92, in 2010, Rocky decided to buy a guitar, take lessons, and enjoyed playing and singing with his teacher, Roy Thomson on several private and public occasions. The family wishes to express sincere gratitude to the staff at the Veterans' Unit at Soldiers' Memorial Hospital for their wonderful care and compassion in the last year and a half. We are all very appreciative of the attention he received. In addition, special thanks to Roy Thompson, Bill Wilson and Alan Marshall who supported Dad enormously in doing what he valued and enjoyed so much - producing music and singing the Ink Spots. A gathering of family and friends will be held at 4:00 p.m. Monday, August 3, 2015 in the White Family Funeral Home, Kentville. Interment will be held at a later date the in the Scotch Village Cemetery, with a reception to be held in the Newport Baptist Church. Donations in memory may be made to the Canadian Red Cross, MSF (Doctors Without Borders), or Landmark East School. Arrangements have been entrusted to the White Family Funeral Home, Kentville.